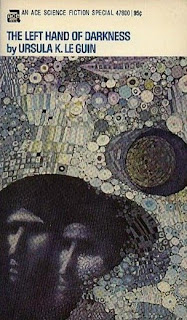 As you might know from my previous posts, I've assumed that in my development of a D&D setting, the themes of the setting itself will help me choose the rules I want to use. It seems that I was wrong. Since I last decided I'm leaning heavily towards OD&D, I've been doing some thinking about the race-as-a-class rule.

When I first came into possession of several D&D retro clones, the race-as-a-class idea was bothering me. I was always aware that it existed in the original game, but I guess just because I was used to not treating races as classes, the idea seemed simply unattractive and limiting.

Some time later, as I was reading some Grognardia, I found this article in which the author states:

"Aside from mechanical simplicity, what I really like about race-as-class, at least in the case of elves, is that it helps emphasize their differences from humanity."

It is a point I totally agree with. This and an other very good post from the same blog got me on the track of thinking how to differentiate demi-humans from other races.

Today I came up with the solution. It's not a revolutionary one (at least for me, I can imagine there are people that would behead me for what I'm about to say), as I've first encountered it in the 2ed. of WFRP, where the only elven deity is a hermaphrodite. There, I've said it. My elves are hermaphrodites.

The true source of the idea is one of my all time favorites "Left Hand OF Darkness" by Ursula K. Le Guin. One of the themes investigated in the novel is the problem of how sexuality and gender influence culture and political life. One of many strengths of the book is a very interesting depiction of the hermaphroditic race. Here's a quote from wikipedia:

"The inhabitants of Gethen are sequentially hermaphroditic humans; for twenty-four days of each twenty-six day lunar cycle they are sexually latent androgynes, and for the remaining two days (kemmer) are male or female, as determined by pheromonal negotiation with an interested sexual partner. Thus each individual can both sire and bear children. It is hypothesised by the first representatives of the Ekumen to explore Gethen that their unique physiology arose from a genetic-modification experiment."

I think the idea to apply this description to elven race is a very good one, especially that I've already found a way in which it might serve my "prime" setting assumptions. Namely, the experiment mentioned in the above quote, will be performed on the race by itself. I can easily see my image of eternal elves conquering the world, just to decide that it's not enough for them and since they are already immortal, they will try to ascend into godhood. However the experiment went wrong in the end also depriving the race of it's close to immortal status.

So there. I know it might be too much for some of you. And I don't blame you. This solution brings many problems into my setting, but I always liked to put "difficult topics" into my games...

Oh. Btw. I'm still not decided about race-as-class!
Posted by squidman at 1:53 AM