This weekend I went to Krakow to see Converge and Kylesa. It was areally good show, and we got to be at the front of the stage when Kylesa played, Julia even managed to get Laura Pleasant's pick.

However this post will be a about the first supporting act - Kvelertak (Norwegian for "stranglehold").

Imagine how AC/DC would sound, if they were from Norway and that's really it. They are a fun mixture of punk, hard rock and black metal, covered in a sauce of viking themed lyrics sang in a clattering language. They can put on a really good show and instantly won the full appreciation of the audience.

Here's how they sound (and look):

What I really found interesting is, that for a reason unknown (at least to me), they have an owl thing going on. There is an owl on every piece of their merch, as well as on the Baizley designed cover of their debut album. 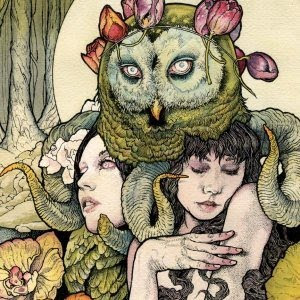 The owl theme goes so far, that at some point of the show, their vocalist put a rubber owl mask on his head. It was really weird, but also kinda cool.

Since there is no photo, just try to imagine the dude from the vid wearing this.

I like owls and I like the folklore surrounding those birds. So here is what I brew up on the train:

A man with a head of an owl. I see him as a norse rendition/commentary on the minotaur myth.
He lives deep in the forest, perhaps in a natural cave or rock labyrinth. The sages and tale spinners from villages on the borders of the forest say that he was once a powerful warrior-wizard who was cursed by the gods of nature. Others claim he is a man who was elevated by the Mother Goddess to be her husband...

It is uncertain wether he is a positive or evil entity. Some legends say that he is an immortal protector of the forest, other picture him as a mischevious being who follows his duty only because of a powerful curse. Whatever the truth is, some bits of information are present in all tales of the Ugelmann.

A random sighting of the Ugelmann is an omen of near death (of the person or a close relative). Ugelmann's curse or blessing is that upon laying eyes on any humanoid, he sees how it will die.
It is widely believed that he posses great knowledge and that some seek him out to gain insight into the future. Anyone who seeks out the Ugelmann can ask him one question, but will be asked for a favor in return. This favor is an oath and anyone failing to fulfill it will be killed by the Ugelmann.

It is often believed that Ugelmann observes people living on the forest borders, this is why many mothers prompt their misbehaving children, by saying: "Be good, or the Ugelmann will take you!".
Posted by squidman at 12:23 AM 3 comments:

I am behind with posting my second SAGE request, but since I wasn't the only one writing it and I'm kinda tired and decided to leave it for tomorrow.

Instead, I give you the first of my planned series on my MF campaign inspirations.

Since it's Music Monday (the alliteration day) here are some videos that are both visually and sonically responsible for how I play MF.

Let's start with something weird and perhaps unexpected for those familiar with my previous music references. If you can't stand synthesizers or electronic music, I recommend muting the vid (but do watch it).

Here's something completely different, though the video is also animated. I once heard or read that "Queens of the Stone Age owe as much to Black Sabbath as to Beach Boys". I agree. And that's exactly why they are here. I chose this particular song, because to me, a MF adventure should have the dynamics of a drug trip. It should be really weird and full of surprises while possessing some twisted inner logic. Some fear and joy should also be added into the mixture.


A good MF adventure should have at least one pair of tentacles (or at least tendrils) in it. As an aesthetic statement. It should also be a bit like a b-class horror movie.


This is a very obscure, yet very good band called Fiend Without a Face (after a 50's s-f flick). It's a side project of Mastodon's guitarist - Brent Hinds. They play a very weird mix of surf, psychobilly and grind? They put out only one record, which has been out of stock for a long long time, but I think it's downloadable somewhere off their myspace. Definitely worth checking out!

As I said before, I really like to build my MF sessions on both - the retro-stupid fun and post apocalyptic horror. Here's a band that really helps me achieve the second thing. I really like Grails, they're like Pink Floyd, just less radio friendly and more intelligent.

Finally, this list would be incomplete without this brilliant vid.