Music Monday: The Heart Of The Sun

Finals, essays and my father's broken collar bone are still kicking my ass. I So I'm gonna just share some inspirational music with you.

And a modern rendition:

Ever since I hit it with my axe stated airing I was wondering: how long one does one encounter last at their table? Zak answered it the other day:

"On the other hand, a combat round is about a half-hour real-time of moving and deciding and rolling (twice that when Frankie is playing)"

Yup, just as I've suspected. Even if you are an octopus DM, it's simply impossible to have fast combat when playing with a lot of people. It made me think about my experiences with various group sizes. I came up with this analogy. It's stupid, but illustrates the problem well.

Yeah, you saw it coming, didn't you? However, if you have any music playing xp, then you know it's true.

If you're in a band, it means you have to go to band practice regularly, same with a stable gaming group. Needles to say, everyone should be excited and stoked about sitting in a small, stinking practice room, otherwise the "band" won't last long. The Golden Rule of Everything also holds. You don't want dicks in your band, just like you don't want them at your gaming table.

If we take this analogy further, we'll arrive at the notion of the DM as a producer. He is the guy who should pull the strings and set up the playing environment in such way, as to get the best out of each person in the room.

Just like there are many types of producers, there are many types of DM's. Some like to partake in the creative process, give hints, or even play instruments. Others step back as soon as the shit starts rolling. They let the musicians do whatever they want, while they take care of the technical/logistic side of things (we call it sandboxing).

However, weather we are talking about a bunch of musicians or just some friends sitting at a gaming table, in the end it all boils down the dynamics of the group/band. Every single person should know their place and let others do their own thing, while still having fun and expressing themselves in their own voice.

So here's how I think the dynamics of a gaming group might change depending on the number of people involved. Please note, I don't count the DM.

Going solo might be the hardest of all possible configurations. The spotlight is on only one person and either she has balls of steel and cool ideas, or everything crumbles into oblivion.

What's more important, this type of gaming seems more intimate than the others. Both, the person running the game and the participant, should trust each other and feel comfortable with what they're doing. Especially since the player is forced to act, for if he doesn't participate no one else will propel the game.

On one hand this configuration is easier than the previous one, since the DM doesn't have to hire any "session musicians" to help out the players. It also takes the responsibility of being the only player.

On the other hand, DMing for two people doesn't differ much from running a game for one person. Most of the problems are still very similar and game balance is still an important issue, especially when running it old school.

However, one thing that may become present in a duo game (and is completely absent from a solo game) is the ego factor. For example, an experienced player my push a newcomer from the spotlight. Still, from my recent experiences I can say, that a pair of good friends at the table can be a recipe for a very successful game.

This is probably my go to line up. Both musically and in D&D. It offers versatility and enough space for everyone to make themselves comfortable. One person can play many roles without limiting the choices for others. The one thing I noticed is that there seems to be the least problems with ego in this configuration. Even if someone gets out of control, the two remaining players team up to put him back into his place.

Pretty much the same as a power trio. The only problem specific to such a line up occurs, when two, or more players occupying the same slot in the group start competing. The problem is that it's hard to provide two traps next to each other in order to keep two thieves entertained etc. Such situation has to be simply talked over, many solutions are at hand.

The problem is that the more people are at the table, the more likely is there to be an ego conflict. The DM has to divide his attention between all the PC's equally and this may often lead to people actively "marking" their willfulness to act by shouting, waving, hurling dice etc. It's very amusing, how mentally stable individuals can transform in a group.

The other problem is that fights (and here we go back to the Zak's quote) become super slow. The strategic element usually is exaggerated and people tend to get bored while waiting for their turn to roll. Additionally game balance is once again compromised (and I don't mean it in a 3ed sense). The problem is that a party made up of seven first level characters has huge "firepower", but can't take much damage. And rerolling characters for 4 people can really kill the whole session.

The bright side is that the case of several people sharing a class isn't a problem anymore. Why? Because almost everybody in the party has a double!

Big group gaming isn't for me apparently. And yet, there are people who can pull it off. I salute you.


I have heard rumors that in the old days before the empire, there used to be parties of 12 people? Seriously? What was the largest group you've ever played in?

As you already know, Frank Frazetta died yesterday. He passed away leaving behind a huge body of work, that will outlive most of us and continue to inspire generations to come.

Frazetta, like no other visual artist, awakened my childhood imagination and influenced my approach to the RPG hobby (even though I didn't know it was him at the time, back then I was only familiar with his Conan covers). Although his paintings are full of epic themes and pulp adventure, I think it's important to take some time and look closely at some of his works. Because the fundamental question is:

How the hell did he paint that moss?!
Posted by squidman at 12:12 AM 3 comments:

Music Monday: It gives me the Shiver

I feel quite bad for not updating this blog as often as I'd like, but since the end of the academic year is closing in, I don't really have much choice.

I will try to catch up with writing up my recent Mutant Future games, but I will only do it as a break from writing papers on academic subjects, so the posting rate might be very slow.

Moving on to a more pleasant subject.

This weak I decided to share a very obscure band and record, namely the San Francisco's Shiver. 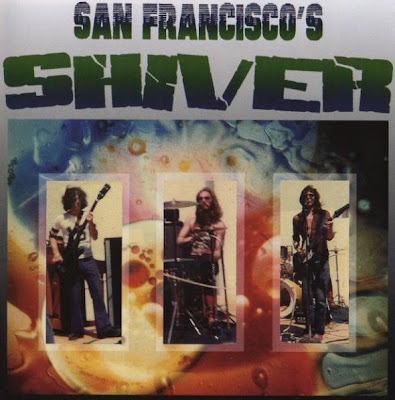 Very little is known about the band or it's members. All I could find, is that the band was "brought together" by an Austin born drummer, who moved to San Francisco. Apparently they had a strong street cred and played for both - the Haight street hippie fairs and Hell's Angels biker parties.

Although the names of the band members are nowhere to be found, this little fun fact somehow survived the test of time:

"At one point they even had a singer with an iron hook for a hand, which he could use as a slide for his guitar, or for more violent purposes."

How cool is that?


This obscure band managed to produce only one album - a live, 1972 street show performance, that was recorded onto a 2-track and than pressed vinyl! Without any studio mastering or overdubbing!

Thanks to such primitive treatment, the record sounds super raw and has a punk intensity, without losing it's psychedelic dimension.

Here's a clip with the opening track, however it's quality is much worse than of the record, so I highly recommend looking it up on the net.