A dungeon from my head

It is a happy day. Why? Because today I got my medical results and I don't have brain cancer, tumors, diabetes, or any kind of neural damage! Yay! I've also felt good for the longer part of the week and there is no sign of my problems returning.

So what was it? I dunno. Truth to be told, no one knows. The most probable hypothesis claims that it was an inflammation of the Membranous Labyrinth.

Now go to this link and look at it! Isn't it awesome? We carry a nice dungeon in our heads (actually two of them. dungeons, not heads).

In honor of our labyrinths, here's a little something to celebrate my well being. Enjoy.

This micro dungeon is the home of Membrious the Mad, a magician of old times who seeking solitude and peaceful environment for his mystical inquiries and strange experiments, moved to live in a pocket dimension.

Membrious arranged his artificial plane in a very peculiar manner. He formed it from usual construction materials - stone, metal and wood, but decided to fill a large portion of the dungeon with a live symbiotic organism that would filter the air and water.

Needles to say, as many powerful (and mad) magicians, Membrious was extremely paranoid about his security. That's why he decided not to anchor his solitude to any particular place in the actual world. Instead he created a magical mechanism, which allowed him to randomly connect his dimension to one of the already existing dungeons.

This means, that every time the mechanism was activated, it "moved" the dungeon entrance (which looks like a normal, iron reinforced, wooden door) into another dungeon from the list of dungeons known to Membrious at the time of creating this apparatus. Unluckily, the mechanism is now malfunctioning and changes the placement of the entrance at random.

The map and descriptions: 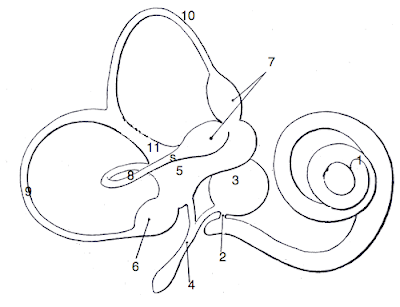 1. This is the entrance. After stepping in, the visitors will enter a long spiral corridor. The walls are made of old, copper colored metal, kind of like a big metal tube. The strange thing about it is that no matter which side the players move - in or out, the corridor will always seem to lead down. The DM should place some kind of a pit trap near the entrance.

At the end of the corridor, just before the door, the PC's will encounter a camp of hobgoblins... They are discussing their plans and if the players won't kill them at first sight, they will explain that they entered the unknown door from their dungeon, but now the exit leads to a different place. Moreover, their leader took 3 of their companions and went to investigate the strange place. They are confused and presume he is dead, if the players show some initiative, the hobgoblins will be willing to join forces.

2. The main door. They are made of coppery metal and have a gargoyle face on the surface. They aren't locked.

3. The mechanism. The walls of this whole room are filled with strange instruments and containers. Looks kind of like this. It is also the home of Membrious' clockwork golem.

He was created to keep maintenance of the mechanism, but now the lifeless body of armor lies on the floor covered with some king of plant growth. If the players remove the growth and menage to heat up his body, or put a electrical discharge to it, the golem will awake and demand explanations. He's perception is quite limited and so is his intellect. The players might gain his assistance at restoring the mechanism to its proper state, by (for example) claiming that one of them is Master Membrious, or came to see him. On the other hand if the players bring him back to life and don't come up with something creative, the golem will attack should they try to descend further into the complex.

4. A small corridor leads past a small bathroom and into the hall. The toilet sink restores 1d4 hp after washing hands. On the other hand, the toilet might scare the players by demand "feeding" in the hoarse whisper of an old woman.

5. This is the main hall. All the wall surface of this tall room is filled with book shelves and cupboards containing strange and bizarre objects. The only exception is east wall in the passage to area 7, where a large painting, similar to this one hangs. Some of the PC's may feel like they caught a glimpse of movement within the painting. Perhaps the girl smiled as they were passing by, or winked when one of them was turning his head away? The room is lit by an elaborate organic structure hanging from the celling, supporting several glowing globes. If the players manage to obscure the light, or turn it down in any manner, they will be able to see the true image of the girl in the picture. Should the room be completely dark, she will leave the canvas.

6. Kitchen and dinning room. The players might easily mistake it for an alchemists lab. Cooking utensils, skinning devices, strange glass containers and so on are scattered all over the place. There is a high chance, that any food the players find is poisoned or has hallucinogenic effects. Similarly, any containers with liquids have equal chances of being either heeling/boosting or narcotics/poison. There is a large hole (crawl space sized in the wall) with an acidic substance constantly flowing out and into an elaborate basin.

7. Those are the workroom (on the right) and the bedroom (left) of Membroius. They are mostly filled by many strange memorabilia, some examples:
In the bedroom lies a concealed entrance to a secret escape tunnel (8) which leads to the main hall (the exit is hidden behind a book shelf).

The workroom, apart from a huge desk with many secrets compartments, contains a weird chair that looks something like this. It's the place from which the mechanism is operated. To change the "location" of the dungeon, one has to place a copper pin ended with a HUGE ruby in one of the holes in the copper tablet map, that is fixed to the wall over the desk. At the moment of entering the dungeon the pin is inserted in one of those places, however until the mechanism is repaired it won't work.

The chair is occupied by the body of Membroius. The remains of the once famous mage look as if something sucked all the water out of his body... The players might notice a thin cable-like thing lying on the floor, connecting the body with a hole in the nearby wall. If they fail their spot checks, the mages carcass will attack them when they are near (for example, when they are searching the desk). He is now controlled by the symbiotic organism, that provides air, energy and water to the dungeon. This organism mutated for unknown reasons and became hostile. Treat him like a powerful construct, that has some of the abilities of the mage he used to be.

9. and 10. those are two "pipes" big enough to crawl in. Pipe number 9 looks like a polished copper pipe with constant flow of an acidic liquid. Pipe number 10 is made of stone and is covered with polyp like tissue, that moves and gives a small breeze. Both lead into space 11.

11. This is the chamber in which the dungeon's "parasite" dwells. The floor is covered with an organic tissue which serves as the organism's digestive surface. It is covered with acidic mucus that is meant to melt any organic mater before it is fully ingested. The half melted remains of the hobgoblin leader and his companions can be found on the floor (perhaps he had a fine magical axe, that is now lying in the acidic fluid). Needles to say, the players standing in the substance will suffer damage to their gear and eventually to themselves. Any contact with naked flesh will cause serious burns.

The parasite itself is somewhat similar to a roper or anything else that is tentacly and scary. I leave the details to any DM. One thing is sure, it is vulnerable to fire. Perhaps he is resistant to non magical weapons? Or maybe he is fully resistant to magic and that is why Membrious got killed? WHat will happen when the organism is dead? Will the lights go out and the vampire/monster/girl from the painting wreck havoc?

I leave this and many other matters (like treasure, stats and touch-ups) to the rest of you.
Posted by squidman at 10:57 PM