The Maiden, The Mother, The Crone

The main reason for the two previous posts about beliefs and religion is that I find them a very important part of every setting. It tends to be treated rather lightly by many game designers, which I think is a huge mistake. In the history of our world, religion and the way people approached it, often mirrors the spirit and atmosphere of a historical period.

That is why I want to create a pantheon that will have a dark, mysterious atmosphere. From the beginning I knew I wanted at least one religion to have a feeling of primitive, wild power embodying the forces of nature.

I somehow started thinking bout Luke Skywalker's visit to Dagobah. You know, swampy, dangerous surroundings, heavy mists. A place where players might feel powerless in the face of nature... That reminded me of a comic book which has a similar atmosphere, namely Slaine (specifically "Treasures of Britain", read it if you haven't). Here are some great illustrations by Dermot Power (click to enlarge): 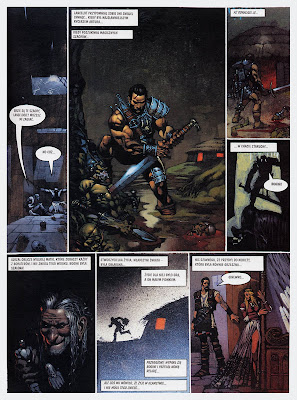 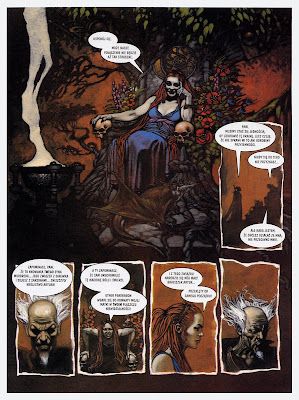 Now I will have to digress, but believe me, I am closing to the main point of this post.

More or less at the same time as I started to think about religions in my world, I read something about druids. I always thought that D&D druids were somewhat tasteless and lacking character. The thing that especially bothered me was the idea of them being neutral(but I think that's a topic for a different post) and "worshiping" nature. I never really bought that. I was always wondering what their religious practices look like, is there any hierarchy or organization? I never came across an interesting idea or description of druids background, but that's not the point here.

Somehow I started thinking of druids and linking them to the swampy, secretive atmosphere. I also stumbled upon this blog entry and started listening to The Sword, who have a song entitled Maiden, Mother, And Crone.

By now you should be able to deduce what happened in my mind. I linked all ideas together arriving at druids worshiping the Mother Goddess.

The Cult of Goddess:

The Great Mother is considered to be the mother of gods and all living beings. She is the embodiment of the primitive forces and laws of nature. The Mother is said to be both generous and treacherous. She feeds all beings and all things alive are her children, but she favors the strong and cunning, and will not hesitate to kill the weak. However she is a fair mother and distributes her gifts equally among all, even if we may think otherwise.

The cult of the Goddess is thought to be the oldest in the world. However it seems that there is no larger organization than that of independent sacred groves located deep in the forests. Less than a dozen such places are known.

The Goddess is worshiped in three aspects - the Maiden, the Mother, the Crone. Each representing different aspects of nature. The Maiden is the embodiment of sexuality and strength of youth. She is often mentioned in rituals as being both a virgin and a whore. The Mother represents fertility and motherhood. The Crone is a mad, blind old woman who is thought to hold the fate of each living being, thus no man can know when to expect death. She is also said to know the future. 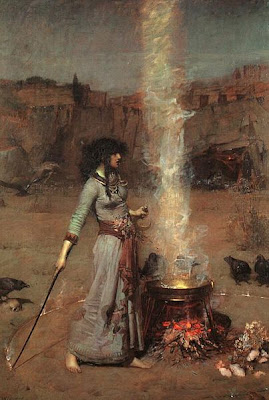 Each of the druidic groves is run by women. At any given moment there must always be three women being the embodiment of The Goddess. They are also the spiritual leaders of the order. On acquiring the "title", they are stripped of their previous identity and can only be talked of (or refer to themselves) as "the Mother" and so on...

Men are prominent in the cult and are the actual priests leading most of the rituals, except the most important ones. All male priests might be chosen by the priestess being "the Maiden" to be her partners, however upon taking the title of "the Mother" a priestess has to marry one priest who becomes her husband and they live in a monogamous relationship. "the Mother" has to become pregnant at least once. The High Priest is supposed to be the embodiment of an ideal husband, he also is administrating the grove.

It is said that in the middle of each grove there is a mystical "Tree of Life". Those trees are said to have been planted upon “Seeds of Life”, however nobody knows whether that is true. Many scholars think it’s a metaphor for places of power or magic knots.
Posted by squidman at 11:47 PM