A poll in god's name!

I can't imagine a pulp fantasy settings without raging barbarians and berserkers in horned helmets! 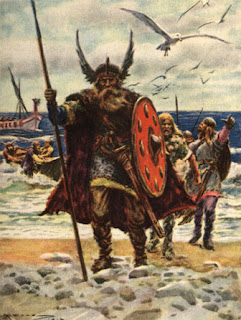 Once in a while everybody feels the need to just create a character that's a half naked barbarian-thief, fast like a panther and strong like a boar. And to enjoy such a character, you need a god with a cool name, one you will call upon when in trouble (even though he doesn't give a shit).

Crom is the real shit, but let's be honest, no one will take your badass barbarian seriously if you call Crom in the middle of the game.

Odin or Thor maybe? Nah... It's not a bad solution since the amount of awesome Thor has might last for the next thousand years. However I'd feel like I'm cheating if I just took the existing gods and transplanted them into my setting (I know that's exactly what Howard did, but he was a pioneer of the genre).

I came up with a nice (a bit generic, but that was the point) story for a god, but I'm helpless when it comes to names. I looked at many old nordic names, narrowed down my choices but can't really choose one (maybe they're all lame)...

I Want Your Help!
I'll post a POLL. It will hang here for circa 10 days, please vote on the name that in your opinion is the coolest, or leave your proposition in the comments!

Now to the meat!

The Lord of Winters, The Old Wolf, The Guardian of the Dead

"His body is covered in a white bear's skin, a horned helmet rests on his head, covering eyes in the color of a burning charcoal. He sits on a throne made from the skulls of his enemies. (...) An axe with a blade forged from the night itself leans on the side of the throne, the one eyed wolf sleeps by his feet..." 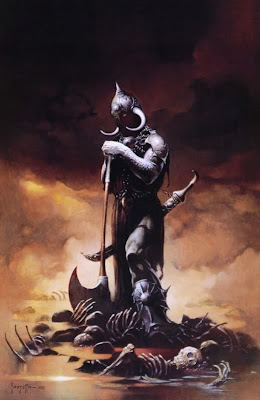 This is how one of the old chronicles describes the god of thunders. Although he clearly hails from the northern regions, he's a deity, whose cult spilled all over the continent.

He is believed to have been the one responsible for creating the earth and the sky, by splitting the world in half. His throne is said to stand at the top of the world, guarding the entrance to heaven and hell. There he battles lost souls and demons who wish to break out. The lightning is said to be caused by the swings of his axe, the thunder is his battle cry.

The barbarians of the north believe that their tribes originate from his union with the Mother Goddess. Dwarfs claim that his beard is made of steel, iron and mithril. They claim that the ores are simply single hair that he had lost during many battles.

The Lord of Winters is believed to have control over wolves, according to the legend he battled the first wolf with bare hands, knocking out the beast's eye. However he was so impressed by the beast that instead of killing it, he befriended it. The barbarians of the north believe that he then used the wolves to teach people how to fight and organize war parties. because of that killing wolves in the north is strictly forbidden, unless it is done without the use of man-made weapons.


Both druids and clerics can be priests of this deity, the first would be the shaman-berserkers from the northern villages, while the latter - representatives of the more organized southern church.
Posted by squidman at 11:13 PM