I'm really happy that I've never bought the 3e. Forgotten Realms Handbook. However, my friend did and I borrowed it. I've nearly read the whole thing, trying to scavenge it for ideas, locations and NPCs...

Now I can say with full conviction: I hate Forgotten Realms. I used to just hate it's "literary offspring", but after reading the handbook, I'm certain it's not R.A. Salvatore's fault it's unimaginative and boring. Flavorlessness is it's premis.

The only NPC I liked in the whole book, was Arrk. Who is Arrk? This is who: 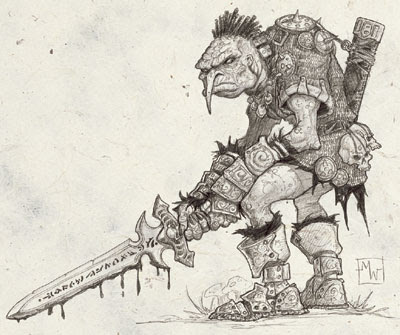 Arrk's a troll, who left his kin in order to become a mercenary. He's a typical bread and butter adventurer... except for the fact, that he's what adventurers usually kill.

The handbook doesn't say much...

"He sells his services anyone with money as long as the job's doesn't take more than a tenday, for Arrk has a short attention span and tires of other people quickly. He has the unnerving habit of licking his bleeding [due to a curse] sword when he grows bored or nervous, and his hygiene is no better that that of a common troll, so civilized folk can't tolerate him for long.
Despite these faults, Arrk can be counted on to hold up his end of bargain. Given that he tends to eat people who steal from him or refuse him his pay, other folk deal with him honestly."